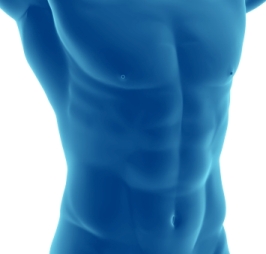 How to Flex Your Way to Six-Pack Abs

Posted on July 3, 2008 by Jonathan Mead | CATEGORIES: health and fitness

It was the summer of 1998. I was 12 years old at the time and a frequent visitor to the local public swimming pool. Our family was doing well that year so each of my siblings and I had a Summer pass. Wow, a Summer pass! I felt on top of the world. I went to the pool religiously every day, right when they opened. I remember many of the teenage boys and men there had chiseled abs and washboard stomachs. I was just starting to like girls at the time and it seemed like all the boys with the muscular physiques were getting more attention from the ladies than I was. As soon as I realized this, that was the beginning of my quest to get ripped.

I started lifting some free weights that my dad had lying around the garage. That helped a little, but I was still self-conscious of my stomach. Keep in mind I wasn’t overweight. I was a lean kid. I wanted a chiseled stomach though, so every day at the pool I would constantly flex my stomach. When I flexed, it looked like I had more definition than I actually did, but who could tell right? So I flexed constantly. I flexed when I walked, I flexed in the pool, I flexed when I was laying down. I started doing it so much, I even flexed when my shirt was on. It just became a habit.

What I didn’t realize at the time was all this flexing had led to greater definition. Now even when I didn’t flex, you could see an outline of my abs. This may not seem like much, but for me it this was exciting.

As my obsessive flexing continued, more and more of the six pack under all those layers of skin started to come through.

I’m not suggesting you go around flexing your stomach all day long, but just think about all the time you’re not doing anything where you could take advantage of this:

Flexing and isometric exercise is proven to improve muscle definition. Now I’m not saying this is the fastest way to develop a six pack, it should be seen as an addition to your normal core workout. Obviously body fat percentage plays a big role as well. If you’re 50 pounds overweight, it doesn’t matter how much you flex, your abs aren’t going to show until you drop some weight. But if your body fat is at a healthy level you’ll see results within a few weeks.

When you flex your stomach, try to focus on the lower abdominals. Your obliques and lower abdominals are usually the hardest part of the stomach muscles to gain definition in. When you flex, try focusing as much on those sections of your muscles as much as possible. Don’t worry about the top and middle abs, you’ll naturally flex them anyway. It also helps when doing crunches, leg raises or butterflies to focus on the obliques and lower abs. Try to flex them as much as possible on each rep. Not only will you gain definition, but you’ll also be recruiting more muscle fibers. This improves your core strength and mind-body connection. Essentially, the more lesser-used muscles you can consciously control, the stronger you’ll be and the greater definition you’ll have.

Flexing any muscle on your body improves the mind-body connection and improves muscle memory. The more you flex, the more your body will think that’s the way you should naturally look.

Jonathan is the author of the blog Illuminated Mind. He writes about finding Authenticity, Clarity and Balance in all aspects of living. His articles include 5 Signs You’ve Married Your Problems (and how to divorce them) and The Cult of Productivity. You can subscribe to his blog here.