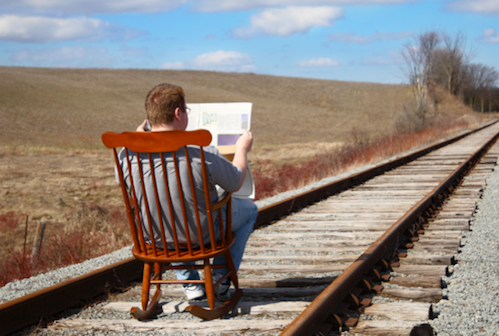 Complacency – How to Avoid the Silent Killer

Posted on December 15, 2012 by Erin Falconer | CATEGORIES: self improvement

We climb from the trenches to reach the top, and once we get there, we’re content with our achievements—but warning! Complacency will lead to extinction.

Success is a wild and crazy rollercoaster, full of ups, downs, and unexpected turns. While a rollercoaster ride can be lots of fun at Disneyland, it’s not a fun way to live your life.

Humans are creatures of habit, and a look back through history reminds us that, although civilization has progressed over the centuries, there are some traits that persist in our collective psyche. Some of the most vivid stories about how people get caught up in the vicious cycle of life— success, followed by complacency and ending in apathy—can be found in a book of the Bible called Judges.

According to the story, the nation of Israel experienced extreme highs and severe lows over roughly 300 hundred years. At one of their lowest periods, they were ruled over by Sisero, a commander of the Canaanite army. For twenty years, the women of Israel were raped and brutalized by Sisero and his men—Sisero’s own mother commented that it wasn’t unusual for her son and his comrades to rape two women a night.

In a moment of courage, a woman named Deborah led the nation of Israel into battle. She raised an army of ten thousand soldiers and they defeated Sisero, who was forced to hide in the home of a woman named Jael.

Courage surged through the strong mind  of Jael as well, and while Sisero was resting, she hammered a tent peg through his temple with a mallet. The blow was so forceful the peg pinned his head to the ground.

The counterattack was successful and the Canaanites were subdued—at least for the next forty years. And this is the problem with success—too often it’s followed by complacency. Complacency almost always comes from a sense of victory long after the success that created it is gone. Complacency becomes the silent killer when it slips to decay and ruin.

Complacency is highly destructive because it’s immune to innovation and fails to recognize either new opportunities or potential hazards. In fast-moving environments of risk, uncertainty, and the unknown, history books show us that this attitude is the perfect recipe for disaster.

Complacency is akin to something called rustout. Rustout is more common in America than in other developed countries and it’s actually even scarier than “burnout” because, while burnout can wear down your body, rustout can wipe out your soul and spirit.

“Rustout is the slow death that follows when we stop making the choices that keep life alive. It’s the feeling of numbness that comes from taking the safe way, never accepting new challenges, continually surrendering to the day-to-day routine. Rustout means we are no longer growing, but at best, are simply maintaining. It implies that we have traded the sensation of life for the security of a paycheck … Rustout is the opposite of burnout. Burnout is overdoing … rustout is underbeing.”

There are many similarities between complacency and rustout. Both lead to underperformance, apathy, and unhappiness:

Here are some ways to avoid complacency:

1. Recognize Your Blind Spots – One of the greatest dangers of complacency is that it creates blind spots in people towards the areas in their life that need growth and change. Blind spots are those critical areas that need to be addressed but they are not visible to people who refuse to knowledge them.

2. Look For Vulnerabilities – When we are complacent, we no longer think strategically about the future. We become too comfortable with our past and current successes. Our thinking becomes short-term, inward, and narrow in focus. We become so enamored with our past performance that we fail to see new threats coming our way.

3. Take Risks – Success is usually achieved as the result of taking risks. People who are complacent do not look for new opportunities. They do what has worked for them in the past. What a disgrace it would be for you to grow old without seeing the beauty and strength of your full potential. As Anais Nin said, “The day will come when it’s more painful to remain tight in a bud than taking the risk to bloom.”

4. Kick Laziness in the Butt – People who are complacent are internally focused on themselves instead of externally focused on others or the situation around them. They work at a constant speed, even when circumstances demand fast action.

5. Appreciate Your Life – The best way to pry yourself out of the complacency rut is to admit that your best life begins right now, not down the road somewhere. Don’t wait until your life is almost over to realize how great it’s been. Stop wanting a better one—you’ll end up taking that for granted, too.

The fact is this: complacency is lack of both confidence and courage to make changes in our lives. As Kurt Vonnegut once said, “Of all the words of mice and men, the saddest are: ‘It might have been.’”

LaRae Quy was an undercover and counterintelligence FBI agent for 25 years. She exposed foreign spies and recruited them to work for the U.S. Government. As an FBI agent, she believed that most barriers to success were internal. She writes and speaks about surviving in an environment of risk, uncertainty, and deception. LaRae is the author of ““Secrets of A Strong Mind” available on kindle now and in paperback in December. You can follow her on Twitter at http://twitter.com/LaRaeQuy

39 Responses to Complacency – How to Avoid the Silent Killer