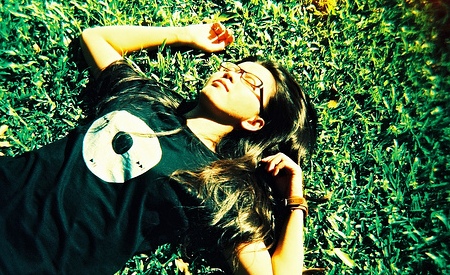 Posted on September 25, 2008 by Erin Falconer | CATEGORIES: health and fitness

It seems like every sleep expert has reduced the fascinating topic of sleep to a boring set of rules:

Sleep is much more interesting than that. Now don’t get me wrong, the above points are valid. Some of it is great advice.

But it isn’t the half of it.

Obtaining super-quality sleep has become a (somewhat nerdy) passion of mine, and I personally don’t think the standard set of rules like the ones listed above really do justice to the nuances of better sleep.

Sleep is no doubt a critical ingredient in a healthy lifestyle. If I sleep poorly, I feel like an irritable, unproductive, unmotivated, unhappy, sick, deprived zombie.

But if I have “10 out of 10″ sleep, I feel like superman. My consciousness becomes crystal-clear. I feel more self-aware. And I get more creative work done than I would as a sleep-impoverished drone.

In this article I will describe five “unusual” sleep tricks that can give you that “10 out of 10″ super-quality sleep.

As many of you know, melatonin is a key hormone in sleep quality. It promotes deep sleep, which not only makes it easier to wake up in the morning, but gives you that superman energy during the day.

Your body, however, only produces melatonin when triggered by a dark environment. And since this production occurs somewhat slowly, it makes sense to get a “head start” on melatonin production before actually turning in for the night.

The “trick” I use is called dawn simulation. One hour before bedtime I dim the lights as much as possible to simulate our pre-industrial environment. If I’m reading, I’ll do so by dim light. Or if I’m meditating, I’ll make my room completely dark.

However, I’m almost always on the computer during the last hour of the day. So what I do is turn down the monitor brightness all the way and put on sunglasses — yes, sunglasses. After an hour or so of sporting sunglasses on a dim monitor I’ll feel a sudden and heavy wave of drowsiness — that’s the melatonin kicking in. This wave of drowsiness is the brain’s way of saying it’s time for bed, and an indicator that going to sleep at that time is a “shortcut” into the deepest stages of sleep.

Many people have great difficulty waking up in the morning. To a large extent this may be because of sleep deprivation or an out-of-sync circadian rhythm. But a groggy morning might be due to something else entirely — lack of alertness hormones.

Naturally, your body spikes alertness hormones — such as cortisol and ACTH — in the morning to help you get out of bed and give you a morning jolt of energy. Difficulty in waking up can simply be from a weak or mistimed hormone spike!

If your body intends to wake up at 9:00am, but your alarm goes off at 6:00am, you won’t get the morning dose of cortisol and ACTH. Fortunately, we can fix this problem.

One study showed that by simply anticipating a wake-up time, your body will spike alertness hormones precisely at that time. So if you go to bed stressing over waking up early (say, for an early flight), your brain’s built-in alarm clock gets “set” to that time and will release hormones to help wake you up.

On the other hand, if you go to bed with the intention of eternal slumber, the alertness spike might occur too late or too weak.

Although the basic psychological trick of “anticipating” a waking-up time seems to work, alternatively you can keep your wake up time consistent day to day so that your brian’s internal alarm clock is programmed through habit.

3. Light in the Morning.

Did you know that sunlight exposure in the early morning is better than exposure at later times in the day?

Light exposure helps regulate our “circadian rhythms”. If our circadian rhythm runs in tune with the 24-hour day, our sleep quality is highly optimized. However, many of us are pushing our body clocks to run on a 25-hour day, which gives us the tendency to stay up later and later each night, making it harder and harder to wake up on time the next morning.

To “reset” a 25-hour body clock back to a 24-hour period, we need to understand how light regulates this body clock.

Although a healthy dose of sunlight at any time of day is good for our health, it’s impractical for most of us to spend our lives outside soaking in the sun. The better solution is to focus on when light has the best resetting effect on our circadian rhythm — during the morning, right after waking up.

I simply go for a morning jog for that dose of morning sun, but people also use light boxes or wide-spectrum lightbulbs with success.

You’ve probably heard that “sleep improves memory” or that “sleep makes you smarter”. Nothing could be more accurate!

Our brain is an incredible machine. Recent research into neuroplasticity shows just how adaptable our brain can be.

We all know that the enemy of a healthy brain is routine. To keep the brain sharp, it must be exposed to new challenges and new environments. Use it or lose it, as they say.

However, daytime mental stimulation is only half of the equation. The other half is sleep.

A bit of “brain fitness” during the day primes your brain for growth, such as through memory consolidation (rewiring) and neurogenesis (cell growth). But that’s all. It only primes the brain. It’s stage 3 and stage 4 sleep where the actual rewiring and cell growth occurs!

For a highly creative individual who wants to maximize cognitive abilities, maximizing stage 3 and 4 amount is critical. Without proper deep sleep, any skills that were “practiced” during the day will be tossed out the window.

I almost feel guilty spending a day just surfing the web, or just watching TV. Every day we have an opportunity to take advantage of the brain-enhancing process that will occur the following night. And for every day we stick to the old routine we miss that opportunity.

Whether its learning a language, playing a musical instrument, working on math problems, or simply exploring new locations, a bit of mental challenge will help you get the most out of sleep’s brain-enhancing functions.

5. Wake up to Euphoric Music.

An obnoxious buzz from an alarm clock is no way to start the day.

A trick I’ve been using for some time is waking up to mood-enhancing music. It’s a simple trick, but can be very powerful in determining your morning state-of-mind.

If you set euphoric music as an alarm it does two things.

First, the clear mental slate during those first few moments of consciousness is, I think, more impressionable to external emotional cues. Waking up to euphoric music instantly triggers a positive emotional response before negative thoughts can take over. This is a great way to start the day.

Second, if you set the music volume just right it will only wake you up at the end of a sleep cycle, which is a natural wake-up opportunity for your body anyway. It takes some experimenting — not too loud so that you don’t wake up in stage 2 or REM sleep, but not so quiet that you won’t move out of stage 1 sleep and into consciousness. If you get this right, waking up will be much easier.

If you try these sleep hacks for a week or two, don’t be surprised if you start getting that “on top of the world” feeling after a good night’s sleep.

Jeff writes about a variety of sleep-related topics over at SleepWarrior.com. Be sure to check out his eBook, 40 Sleep Hacks: The Geek’s Guide to Optimizing Sleep.