Money and Spirituality: Why We Have Always Been Wrong About Their Relationship

Posted on September 10, 2018 by Clarisselee | CATEGORIES: money and finance, self improvement

Almost all of us grew up with a skewed perception of money.

We either blame money as the source of all our problems

or we think money is the solution to all our problems.

For those who think that money is the solution to all their problems, you’ve probably heard them enviously complain about how easy rich people have it. The people who disagree are probably lying.

However, as much as it’s easy believe wealthy people cheated their way into success overnight, it is often a false and counterproductive attitude.

What Happens When You’re Not Ready For Money

Some wealthy people inherit their money and a few others win the lottery. Many of us consider them “lucky”; we think they have it easier. While that may be true in some aspects, that doesn’t exclude them from the universal laws of human behavior and consequence.

You and I have seen it in the news or heard stories. If these people are not conscious enough and ready to handle the responsibility of money, the wealth will leave–often in the form of short-lived pleasures which lead to future regrets. 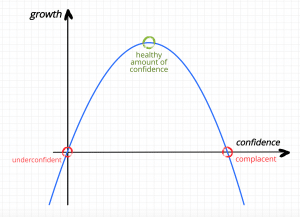 Growth in relation to confidence.

Money is a form of power or energy. It can be a powerful tool if in the hands of a capable person. If you lack confidence and ability, you won’t be able to wield it. Too confident and you may lose control and do more harm than good.

What does it mean, then, to become a person capable of wielding money well?

It means we must undergo a comprehensive and systematic transformation of ourselves.

Sounds simple, but it is quite difficult in application.

Why Most People Struggle

I will use fitness–specifically weight loss–as an example. It is a great analogy for money issues, because it is a problem that most people struggle with and, coincidentally, also requires the same solution to resolve.

We often think that if we make enough money, we will finally be happy and secure. Our ability to live a wholesome and worry-free life rests solely on how many dollars we make.

That is equivalent to saying becoming fit rests solely on how much broccoli one eats. Yes, eating greens is an important part of becoming healthier. However, that action alone won’t lose you 30lbs or build your stamina.

Becoming wealthy isn’t the result of one action but, rather, a series of habits and mindset changes over time.

Getting and growing money is a side effect of becoming a more developed, capable, and conscious version of you.

Conversely, you won’t become a significantly better or happier person if you are just handed money.

When we change our entire selves, we inevitably change our “financial” selves as well.

The only difference between the current “you” with debt and the financially free “you” is the fact that the latter has taken repeated action, made mistakes, and made progress to transform.

“The master has failed more times than the beginner has even tried.” -Stephen McCranie

Here is the formula to getting there:Mindset + Repeated Action + Time = Change of Behavior Over time = Change in Identity

It’s cliche because it’s true. All significant and long-term changes are made and sustained by a fundamental shift in mindset. If you don’t think you will earn money because you lack self-belief, you can bet your bottom dollar that you won’t be making many.

Fortunately, in today’s world there are a plethora of resources to help you build an abundant mindset. Here are three pillars of creating a positive abundance mindset:

Tom Bilyeu, founder of million-dollar company Quest Nutrition, said “Taking action is the best information stream.” You can contemplate, plan, and procrastinate all day, but there’s no faster way of knowing whether you’re on the right path or not than by doing. Here are things to keep in mind when you’re taking action:

In a world where instant gratification is as rampant as low-quality hookups or social media depression, we are tempted to go for the fastest and easiest option even if it doesn’t leave us any happier. Likewise, people who attempt get-rich-quick schemes always return empty handed or even worse off.

Becoming somebody who is truly capable of earning and growing money takes time. It requires building a positive relationship with money, creating the confidence to save and spend well, and developing the courage to try new but necessary things like investing.

It is our loss that society taught us to separate money and personal finance from spirituality and emotions.

Upon deeper analysis, they are simply different sides of the same coin. Money allows us to afford a healthy and wholesome lifestyle; spirituality guides us how to think and act for living a fulfilling life.

Being able to afford educational materials and courses enhances our spirituality, while mastery of our minds allows us to become people who make more money.

Personal finance and personal development: different paths that ultimately lead us to the same destination.

What is your opinion on the relationship between money and spirituality?

What is your current relationship with money?

Clarisse Lee has spent the last two years on an avid quest for self-mastery which has allowed her live a life she never imagined: creating art and providing inspiration for others from her home abroad. That’s why she created {Insert Your Greatest Joy}–an email list where she provides weekly resources for creatives, sensitives, and people who want to make money doing what they love most.