10 Quotes On Anger To Help Calm You Down

Posted on February 18, 2015 by Alden Tan | CATEGORIES: motivation, self improvement

It can spawn its ugly minions, like frustration, fear, anxiety, stress and even rage.

It can feel like its eating you up inside as it practically ruins your entire day while filling your head with a bunch of angry, negative thoughts.

Let’s cool it a little shall we?

Here are 10 quotes on anger to help calm you down

1) “If you get angry easily, it may be because the seed of anger in you has been watered frequently over many years, and unfortunately you have allowed it or even encouraged it to be watered.”

Indeed, you’re responsible for your anger.

Effectively, to constantly water it would mean you’ve created the habit of anger. You’re probably even addicted to it.

To stop being so angry, you’ve to break out of anger. Stop watering the angry seed within, live your life and start planting other seeds!

2) “Speak when you are angry – and you’ll make the best speech you’ll ever regret.”

You’ll never mean the things you say when you’re angry. So try to be calm. You don’t want to end up saying things that’d only serve to produce guilt and regret.

3) “Where there is anger, there is always pain underneath.”

Anger is not a primary emotion. It’s secondary.

You’ve find the root cause of your anger. What is it? Fear? Rejection? Sadness? Guilt?

It’s going to be terrifying, but you’ve to be honest with yourself and start asking the bigger questions in order to overcome anger.

4) “Holding on to anger is like grasping a hot coal with the intent of throwing it at someone else; you are the one who gets burned.”

That’s how it feels like when you keep thinking about revenge or getting back at your wrongdoer or bully.

This is why you’ve to let it go. All the angry thoughts in the world isn’t going to help change your situation. The best thing you can do is lead your own life and be happy. That’s how you surprise your enemies.

5) “For every minute you are angry you lose sixty seconds of happiness.”

It’s only logical. Getting angry is not allowing other positive emotions to come in and that is time and space you’ll never get back.

And life is way too short to be pissed off all the time. You’re going to die eventually, so be smart about it!

6) “Hanging onto resentment is letting someone you despise live rent-free in your head.”

That is why you need to stop holding grudges or coming up with scenarios of getting back at them!

It simply doesn’t make sense to let toxic people play such a big role in your life. Raise the rent in your head. Stick with good people only.

7) “Throughout life people will make you mad, disrespect you and treat you bad. Let God deal with the things they do, cause hate in your heart will consume you too.”

Yes, life is just like that. People will find a way to make you angry, but that’s not something you can control.

So let it go. It’s no use wishing that people should abide by your standards. It’s only going to make you even more mad. Let God, the universe or life itself deal with them.

This is so straight-forward.

Anger in the end, cannot sustain you. It can perhaps propel you with energy, but if you use it to create more anger, then happiness will never come to you.

9) “Anybody can become angry — that is easy, but to be angry with the right person and to the right degree and at the right time and for the right purpose, and in the right way — that is not within everybody’s power and is not easy.”

I love this quote for the fact that it states how easy it is to be angry.

To extend that, I like to say that it’s easy for anybody to get angry and start breaking things around the house, shout at somebody or even get into a fight.

It’s not easy however, to stay calm, think logically, be wary of consequences and ultimately be the master of your own emotions.

Isn’t it time we stay above it all and work for a happier life?

This last quote is rather long, so I made it into a picture.

To sum it up, it means: You’re part of a grand journey called life. You’re always creating new experiences for yourself. Don’t judge the experiences. Just take it in and be happy.

What others do with their experiences is their problem. Not yours. 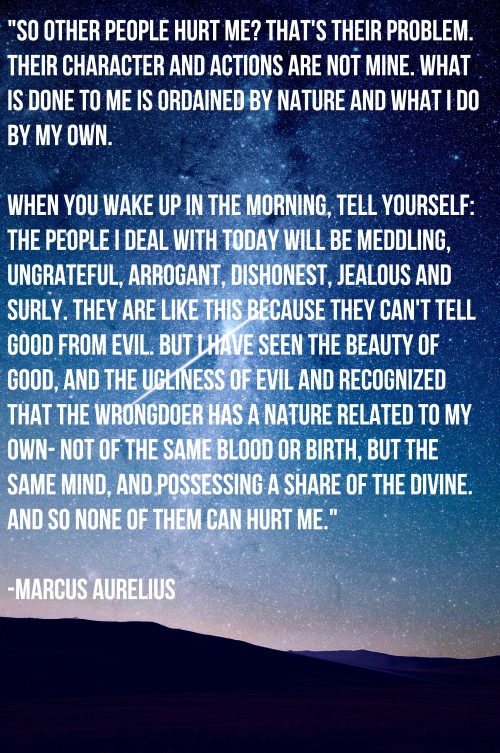 Hope you enjoyed the quotes!

Do you want to help Eliminate World Anger?

I just created a new course that serves as a source of inspiration and personal stories to help overcome anger quickly and easily.