Why You’re Only Getting Better with Age

Posted on April 14, 2011 by Greg Daniels | CATEGORIES: self improvement

We’ve all heard it. Someone says something along the lines of, “To be young -well, don’t get too used to it because it’s all down hill from here.” We safely heed this warning, but as the years pass and we don’t see the ultra-rapid decline we expect, we begin to ask ourselves if there’s any truth to the belief that we peak when we’re young. A little bit of psychological research gives us the answer we’re looking for.

Dr. K. Warner Schaie, an American social gerontologist and psychologist, is a co-founder of the Seattle Longitudinal Study. Started in 1956 and still running today, the Seattle Longitudinal Study looks at aging as it relates to cognition by measuring the abilities of participants from birth through old age. As of present, the study has produced some amazing findings.

Contrary to popular belief we don’t begin a rapid cognitive decline at age 18, 21, or 25-the arbitrary ages usually associated with peak. In fact, with the exception of perceptual speed and numeric ability*, our skills increase steadily until we are about age 55. It is much more accurate to say that we peak in mid-life when inductive reasoning, spatial orientation, perceptual speed, numeric ability, verbal ability, and verbal memory all seem to balance out.

Take a look at the graph below-notice that the abilities of most people tend to align between ages 53 and 60, much later than popular wisdom would have us believe! 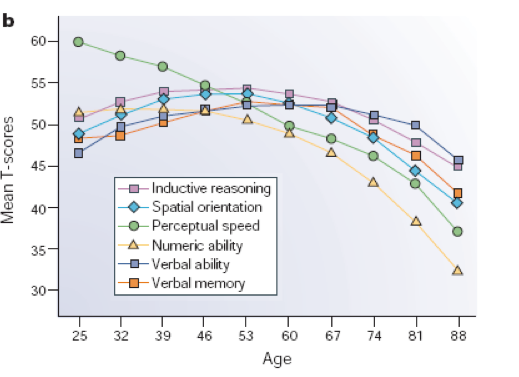 Of course the Seattle Longitudinal Study has scientific implications, but on another level it is very motivational. Many are discouraged when they’re told the falsity that they will peak at a young age; thinking that they are past their prime they shy away from their goals and dreams. Dr. Schaie’s work has us realize that getting older is not a detriment, but advantageous, and that with each year we should be moved to action. Let’s look at a hypothetical situation in which the Seattle Longitudinal Study inspires.

Lisa, a 50-something, wants to go back to school. She knows that she will have to adapt to the academic life but questions whether she can truly keep up with younger peers. Her friend Susane, a counselor by profession, tells her about the Seattle Longitudinal Study and the advantages of age. Motivated, Lisa takes the leap and enrolls for the fall semester. School begins, and after a few weeks of adjustment she finds that age is indeed a useful friend. Lisa’s perceptual speed may have waned a bit over the years, but her vocabulary, oration, and logical reasoning are superior to that of her younger peers-she does well.

If you ever catch yourself limiting your choices because of age, remember the story of Lisa. Don’t pay any mind to those who tell you that, “it’s all down hill from here.” You can accomplish your goals and dreams-be happy for each candle on the cake because a year older is truly a year wiser.

*Scientists, engineers, programmers, and mathematicians may be horror-struck by the Seattle Longitudinal Study’s recorded decline in numeric ability over time. Most people, however, don’t use their math minds on a day-to-day basis. For those of us who do, we can probably conjecture an increase, or at least a lessened decline, in numeric ability with age.

Greg Daniels is a writer currently based in Singapore. He holds a bachelor of arts in applied psychology from Pace University in New York City, where he won a graduating award for his writing on the topics of psychology, technology, and education.